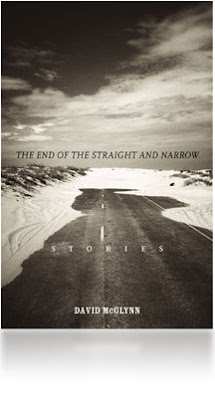 Here's the conclusion to my interview with David McGlynn, author of The End of the Straight and Narrow.

To buy David's book (and you should!), click here.

Joseph: Are there stories you ended up not including in the book? How did you decide what to include and what to leave out?

McGlynn: I submitted the manuscript with one story that didn’t make it into the final printed version. It was an ill-fit story for the collection and one of the reviewers suggested I take it out. All I needed was that little nudge and I took it out. The other stories were consciously written to go together, so I didn’t have to wrangle over that question too much. It’s a very connected book, even between the two parts, and the central questions helped me decide which stories belonged and which didn’t. I had one very early story that fit thematically, but when I went back to try to work on it, I couldn’t stand the sight of it. So I bailed and stuck with the work I had before me, the nine stories that made it into the collection.

Joseph: How did you decide on an order for the stories?

McGlynn: In some ways, the order was determined pragmatically. I had a five-story cycle of stories and four more unconnected, but thematically related stories. The linked stories seemed to belong at the end of the book; had they come first, the other stories would have felt like a trailing hodgepodge. “Seventeen One-Hundredths of a Second” was so long it had to go at the end of Part I; had it come first, no one would ever read the rest of the book. “Moonland on Fire” and “Landslide” are both set in California and so belonged together and seemed to fit at the beginning. After that, all that remained was “Deep in the Heart” and there was only one spot left.

But I’m being a little sheepish. The order wasn’t purely pragmatic. When all the stories were written, I spent a while thinking about the larger narrative trajectory. I wanted the book to have a pseudo-novel arch. And, there is a subtle chronological progression to the characters: Nolan, in “Moonland on Fire” is seventeen; the narrator of “Landslide” is a senior in college; Jonah in “Seventeen One-Hundredths of a Second” is in his early thirties; and Rowdy, the narrator of Part II, though a young boy in the stories is, like Jonah, also in his thirties. He often speaks in the present tense, but thinks about the past. Moreover, at the end of the final story in the book, Rowdy declares himself “the keeper” of his family’s stories. Storytelling permeates throughout the collection; if you look closely, people are always telling, and keeping, stories. Gary tell his daughters about the fire when they come to visit at the end of “Moonland on Fire,” the narrator of “Landslide” has built a career around a single story, and Jonah’s sexual life turns on the telling of a closely guarded story in “Seventeen One-Hundredths of a Second.” When Rowdy declares himself the keeper of his family’s stories, he’s mostly speaking about the five stories in Part II, all of which he tells in one imaginative form or another. But I also wanted the phrase to echo across the entire book—I, the author, am a story-keeper, too. Like Rowdy, I decide what stays in and what gets cut, how people are rendered and how they are remembered. Rowdy’s final declaration is meant to bring the entire book to a close, and I think it does.


Joseph: What are you working on next?

McGlynn: I’m working on a collection of creative nonfiction essays titled Rough Water. Some days I call it a memoir-in-essays, but I’ve never particularly liked the word memoir, so most of the time I call it a collection. A number of the essays are about swimming, which is one of my lifelong passions. I was a competitive swimmer throughout high school and college, and remain somewhat competitive today (I race a few times a year), and each essay in the collection wends it way toward water in one way or another. In one essay, I tell about getting lost in the Utah desert, and finding water becomes an important focus. In another, I tell about worrying about the plumbing in my house—convinced the pipes are leaking inside the walls—while my wife and I worry over the results of an amniocentesis, which will determine whether or not our second child will have a very grave genetic disease. The essays aren’t just about swimming, though. They’re also about my family, growing up in the suburbanized American West, money, hunger, sex, and religion. The first few essays were written during the writing of The End of the Straight and Narrow, so, again, my obsessions and fascinations with religion jumped the fireline between my fiction and my nonfiction.
Posted by Diana at 6:54 AM