Top 12 Online Literary Journals: click here.
Posted by Diana at 10:00 AM No comments:

The Book Publicity Blog: click here.
Posted by Diana at 9:29 AM No comments:

Run Away, My Pale Love, a short story by Steve Almond
Posted by Diana at 5:15 AM No comments:

Hyde, Lewis. The Gift: Creativity and the Artist in the Modern World. Vintage (25th Anniversary Edition) 0307279502

This is the FINAL version of the reading list:

"That was another impact. I was doing nightclub comedy down in the Village. I was down there in ’63, ’64, and my friend told me about Arthur Koestler’s book about the act of creation and it had a section on humor.

He was talking about the creative process. There was an illustration on the panel that showed a triptych. On the left panel, there were these names of artistic pursuits. There were poets, painter, composer. And one of them was jester. I was only interested in the jester. What he said about each of these, he said these individuals on the left hand side can transcend the panels of the triptych by creative growth.

The jester makes jokes, he’s funny, he makes fun, he ridicules. But if his ridicules are based on sound ideas and thinking, then he can proceed to the second panel, which is the thinker—he called it the philosopher. The jester becomes the philosopher, and if he does these things with dazzling language that we marvel at, then he becomes a poet too. Then the jester can be a thinking jester who thinks poetically.

I didn’t see that and say, 'That’s what I am going to do,' but I guess it made an impression on me. I was never afraid to grow and change. I never was afraid of reversing my field on people, and I just think I’ve become a touch of each of those second and third descriptions and I definitely have a gift for language that is rhythmic and attractive to the ear, and I have interesting imagery which I guess is a poetic touch. And I like the fact that most of my things are based on solid ideas, things I’ve thought about in a new way for me, things for which I have said 'Well, what about this? Suppose you look at it this way? How about that?' And then you heighten and exaggerate that, because comedy’s all about heightening and exaggerating. And anyways I guess I was impressed that there was another thing from my early life that probably at least influenced me to some level."

Carlin on Being a Writer:

"It’s my primary delivery system. I used to, in my early years, when I would do an interview I was always proud to tell the writer that I wrote my own material, if they asked me or even if they didn’t. I wanted to be distinguished from the ones who didn’t do that, and I was proud of it, so I would say I am a comedian who writes his own material. And then at some point, I discovered what I really had become was a writer who performs his own material.

This was a really important distinction for me to notice—it happened way after the fact. I’m a writer. I think of myself as a writer. First of all, I’m an entertainer; I’m in the vulgar arts. I travel around talking and saying things and entertaining, but it’s in service of my art and it’s informed by that. So I get to write for two destinations. The writing is what gives me the joy, especially editing myself for the page, and getting something ready to show to the editors, and then to have a first draft and get it back and work to fix it, I love reworking, I love editing, love love love revision, revision, revision, revision."

For the rest of this excellent interview with George Carlin, click here. 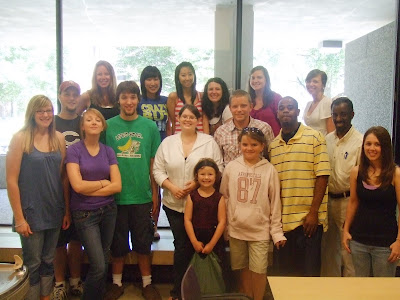 1. Does the writer narrow his/her topic to a single, specific and clear focus?

2. Does the writer provide an in-depth look at his/her topic?

3. Does the writer incorporate sources that are credible, timely, and relevant?

4. Does the writer define terms for the lay person audience?

5. Does the writer properly cite sources?

6. Does the writer rely too heavily on any one source?

7. Does the writer paraphrase in a clear and accurate way?

8. Does the introduction hook the reader?

9. Does the essay have a logical organization?

10. Does the writer vary sentence length/structure?

11. Is the text free from distracting surface errors?

12. Is the text readable prose?

13. Does the conclusion trail off or end abruptly?

14. Does the writer maintain a consistent tone?
Posted by Diana at 6:20 AM No comments:

"The Sportswriter was released as a paperback original by Vintage Contemporaries in 1986 and was named one of the five best books of the year by Time magazine. A PEN/Faulkner finalist, it sold over sixty thousand copies (total sales have tripled since then, and Knopf has recently reissued the novel in hardcover for the first time). Indeed, it was the breakthrough book Ford needed, but early on, he almost didn’t finish it. A well-known, flamboyant editor at Knopf had seen the first one hundred fifty manuscript pages and said Ford should forget about the novel. “He told me I should put those pages in the drawer and go back to writing what I knew best. I guess he meant the South, or maybe he meant stories set in Montana. Anyway, he was wrong. I spent six months after our conversation fretting and brooding about his ‘advice,’ and not writing. But finally I just said, Well, this is the book I’ve chosen to write. I don’t actually harbor any bad feelings about that. He had the right to be wrong, and he thought he was giving me good advice. You just can never tell, though, how a young writer will develop.”"
Posted by Diana at 9:08 AM 2 comments:

Some advice on story collections.
Posted by Diana at 4:42 PM No comments:

Newer Posts Older Posts Home
Subscribe to: Posts (Atom)
You've landed at Diana Joseph's Syllabi. I am Diana Joseph; these are my syllabi. I teach at Minnesota State University, Mankato where every student is my favorite. My collection of short stories HAPPY OR OTHERWISE was published by Carnegie Mellon University Press. My memoir I'M SORRY YOU FEEL THAT WAY is forthcoming in March 2009 from Putnam Books.