Over the next several days, I'm going to post an interview with my dear friend Paul Maliszewski, whose new book Fakers is just coming out. Paul and I were MFA students at Syracuse University together. Here's what I'll tell you about him: in addition to being kind about my cooking, he was also sweet to my kid. He was funny and wise and usually the smartest person in the room. His workshop comments were right on. He was--and still is--such a great writer.

Here's his official biography:
Paul Maliszewski has published his fiction and essays in Bookforum, Harper's, Granta, and the Paris Review, and his stories have twice received a Pushcart Prize. Fakers is his first book. He lives in Washington, D.C. 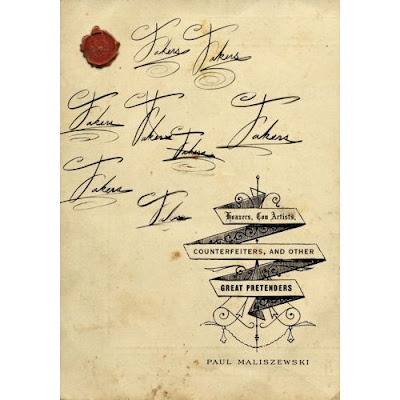 From the Publisher:
For anyone who has ever lied—-or been lied to—-True-life tales about faking, from Clifford Irving to Stephen Glass, by an award-winning writer.

"Fakers are believed-—and, at least for a time, celebrated-—because they each promise us, screen-gazing and experience-starved, something real and authentic, a view, however fleeting, of a great thing rarely glimpsed." —from Fakers

From James Frey and his fake memories of drug-addled dissolution to Stephen Glass and his fake dispatches from the fringes of politics to the author formerly known as JT LeRoy and his fake rural tough talk, we are beset by real-seeming fiction masquerading as truth. We are living in the era of the fake.

Fakers is a fascinating exploration of the varieties of faking, from its historical roots in satire and con artistry to its current boom. Paul Maliszewski journeys into the heart of our fake world, telling tales of the New York Sun's 1835 moon hoax, the invented poet Ern Malley (the inspiration for Peter Carey's novel My Life as a Fake), and Maliszewski's own satiric letters to the editor of the Business Journal of Central New York (written, unbeknownst to the editor, while he worked there as a reporter). Through these stories, he explains why fakers almost always find believers and often flourish.

Since 1997, the author has been on the trail of fakers and believers, asking the tricksters why they dissembled and the believers why they were ever fooled. Fakers tells us much about what we believe and want, why we trust, and why we still get duped.

The essays in Fakers explore:

• Jayson Blair's faked New York Times stories, about Jessica Lynch and much else